Permachar
The RAS is an opportunity for an adaptation strategy working towards a more resilient and sustainable future with integrated Carbon removal and offsetting and geometric scaling potential. R&D of the systems could be done in a network of field testers. Maybe help save a dying Planet too.
1.The biochar kiln system
Kon-Tiki 'Rolls' (KTR)
-alley crops eg.viticulture, agroforestry
-orchards
Kon-Tiki 'Essential' (KTE)
-stationary kiln in one or many stationary locations
2.Compost/Permafert system
Johnson-Su modded and simplified (though needs to be tested) with:
*1*hexagonal vertical star picket formation, Hessian cloth wrapped around the star pickets,  medium milled biochar aquifer supporting 6 vertical 225mm PVC stormwater pipes removed after biomass filling and void filled with  medium milled biochar cores.
Permafert pits or middens built around the compost piles after the composting has completed and star pickets, Rio rod and Hessian cloth are removed for reuse.
*2*See below. I had an old rusty water tank with plenty of holes for aeration. The central tube would be filled with medium milled biochar and removed. The 4 smaller tubes would also be filled with medium milled biochar but would stay in place for slower water release as they have horizontal slots along the length of the tubes.
Once the compost is ready, could be added as a mulch to the Zai pit or Mediterranean swale systems
3.Tree planting holes for trees
Eg. Biomass, fibre, fruits, nuts, medicine et al
4.Square Zai pits with central biochar cores
KTE, Pits are built out from the kiln centre in a keyhole fashion.
After digging a Zai pit and berms are made, add medium milled biochar for the aquifer eg.150mm deep
Place a 225mm diameter PVC stormwater pipe in the centre of the pit lodged into the bottom biochar aquifer and up to the top pit level.
Add the permafert around the central pipe and make a concave shape.
Fill the pipe void with medium milled biochar up to the level of the permafert around the pipe then lift up the pipe to remove it and produce a biochar core.
The shallow/concave pit will concentrate rainfall to the centre of the pit and into the biochar core/aquifer T junction.
Irrigate the central biochar core as required.
Calibrate the central core to a Reotemp 'Moisture Meter' once the first seedlings have sprouted (experimental).

5.Same as above design but Permafert piles with central biochar cores in half of the Zai pits for '3 Sisters' planting

A design for '3 Sisters' (maize, beans and squash) growing. Square Zai pits (built last Spring) updated with central permafert mounds for drainage, central biochar cores linked to bottom biochar aquifers forming a T junction for water wicking and conservation, nutrient reclamation, microbe housing and Carbon removal. Flooding events will concentrate water via the berms in the 'moat' around the mound for outer mound irrigation and additional irrigation as needed via the central biochar cores which will irrigate the inner mound and to an extent fill the bottom aquifer.

My preferred Zai pit design, a little bit more earthworks than the square ones but better water distribution and wicking and easy to make consistent berms around the pit.  Depending on the rainfall pattern (which will become more unpredictable with climate change), the berms could be C shaped if too much water is accumulating in the pits and/or the depth of the biochar aquifers could be modified for more (deeper) or less (shallower) water storage. These will be used for my next pit trial over the Summer and Autumn growing 3 different pumpkin varieties (hard-skinned gourds) in 1 metre diameter pits using unmilled biochar from agroforestry waste for the cores and bottom aquifers. I'm using a cross + of 2x1m lengths of thin bamboo screwed together in the centre as a guide for pit building.

-A pump free and battery free system, which makes me happy as I have broken 4 water pumps.

Make the Biochar in a KTE
A burn is quenched in the KTE with a water siphon from a header tank (bore) or rainwater tank plumbed from a shed, house or bore. A 20 litre stainless steel (ss) bucket filled from a water vessel eg.IBC can also be used.
pH adjustment with food grade Phosphoric acid to suit eg.7 is neutral which is good for most plants.
Leave overnight
Bucket out as much 'smoke water' as possible and use for irrigation
Empty kiln then add medium milled biochar to a 20 litre ss bucket and pound it with a sledgehammer (with a vertical motion) or solar electric mill (Biochar can be used for both the Biochar/loam/clay mix (Permafert) in swale and the Biochar cores)
Dig the swale
Add 1/4 volume with medium milled biochar to the clay bottom
Add manure/liquid sea kelp/bnb/rock dust then mix in (eg.with a Cyclone 'Burr hoe') - no added ingredients wasted!
Add 3/4 volume with loam and clay on top of the biochar
Mix together the Permafert in swale
Add vertical biochar cores 500mm apart. This could be done via whacking 100mm diameter, 500mm length, PVC pipes, say 3 in a row, into the clay bottom after digging a space in the Permafert for the pipe at the clay bottom
Permafert is spread around the pipes to fill the space around the pipe and make the Permafert level in the swale
Pipes are filled up with medium milled biochar to the level of the Permafert then lifted out of the clay to produce a biochar core
Repeat along the swale
Add microbes to the biochar cores with, eg. diluted 'POPUL8' (Neutrog), 'Plant and soil food' (Microtek Organics), Respond Grow (Dugald Hamilton), compost tea (Dr Elaine'sTM 'Soil Food Web School') or even some of Dr Cho's natural farming microbe recipes.
Plant cow pea for N fixation
Once cow pea is mature and biochar has 'aged', chop at base and drop for mulch
Seeds or seedlings eg.annuals and/or perennials planted directly into swale
IRRIGATION
Irrigate the biochar cores as needed with 20 litre ss buckets filled up with water or a garden hose
A Reotemp 'Moisture meter' is needed. The meter probe can be inserted into the base of the cores for moisture measurement and the meter will tell you when you have reached the optimum moisture level after calibration to 'healthy plants'.
Optional micro-irrigation with an Unpowered Measured Irrigation Controller. https://www.measuredirrigation.com/

The biochar cores could be inoculated with microbes, either before or after building them. Since the biochar cores are the main irrigation points and would be regularly monitored with a moisture meter, they will always be moist to a variable degree. This could be perfect for microbe housing in the 3D biochar matrix. The system should self-regulate aka if the moisture content is too high in the core, the microbes will enter the permafert and if the permafert becomes too dry they will re-enter the biochar core. The only problem I see is if the pit or swale is flooded for an extended period of time, some microbes might die. The only way I can think of to check this would be taking permafert and biochar core samples before and after extended flooding events, to a lab and comparing the microbe colony numbers.

Samples of the biochar mix probably need to be taken from time to time after flooding events to check nutrient, mineral and microbe levels and determine if direct top-ups are needed in the swale.

Compost from the Johnson-Su bioreactor (including more biochar) could be added to the top of the permafert as a mulch in swale when needed. This will reduce water evaporation/increase water conservation and also enter the biochar matrix within biochar pieces in the permafert providing additional nutrients and minerals for soil biota and plant roots plus providing additional microbes. For interest, check out in google images 'Terra preta de Indio' to get some nice Terra preta 'soil profiles'. The modded idea is that over time the soil is replenished and maintained with additional layers of biochar/compost/permafert/Biochar Mineral Complex (BMC, Professor Stephen Joseph) inputs - or even with Terra preta if that's what you want to make.

BEAM  extract is worth investigating too. Contact Dr Paul Taylor for more information.

If the clay is too deep to access, there's a possibility of making char-crete lined swales which, if made permeable, might retain water over similar time scales to clay. There are recipes on the internet for this.

If using bore water for irrigation, research can be done to determine the effectiveness of the biochar filtering out the Total Dissolved Solids (TDS) to an acceptable level for a given plant variety. 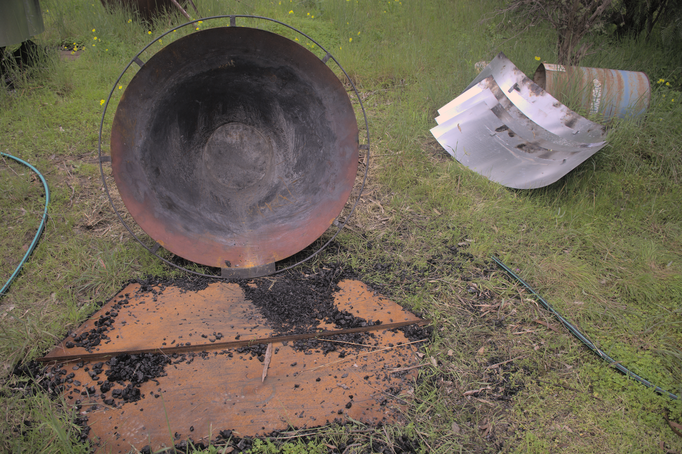 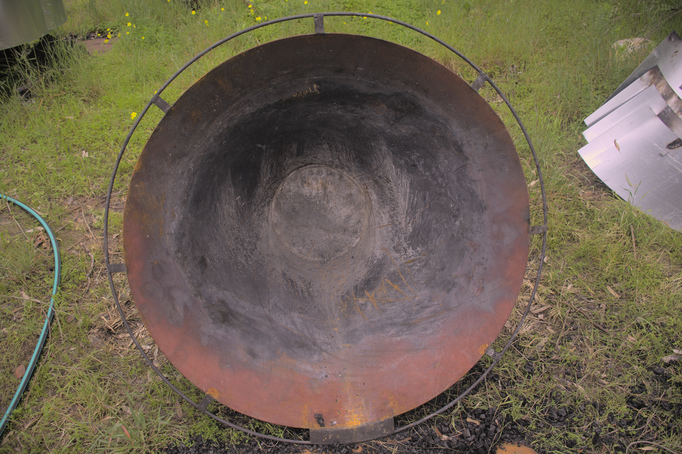 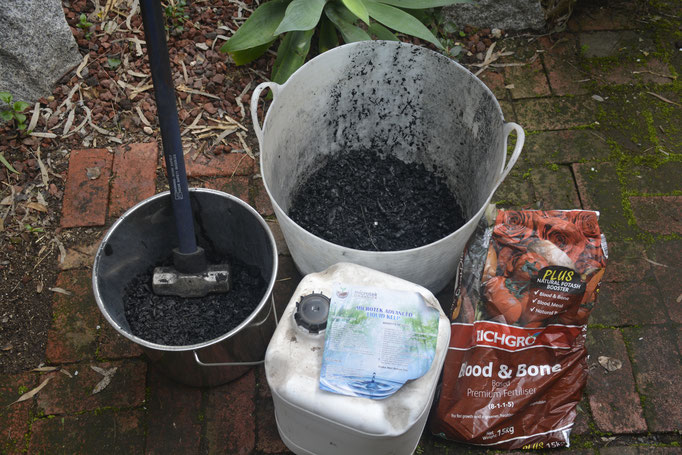 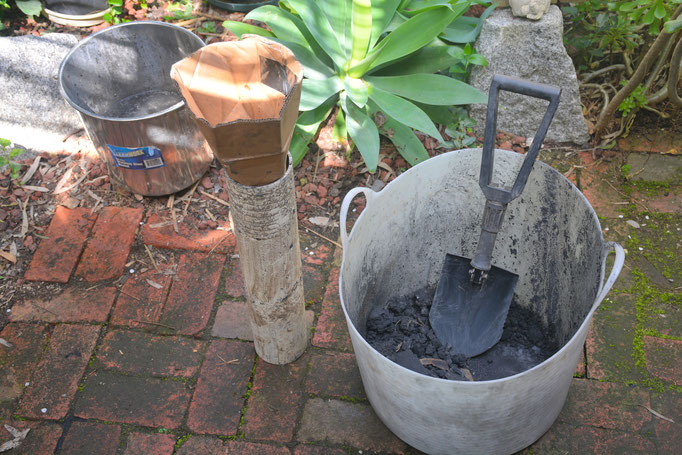 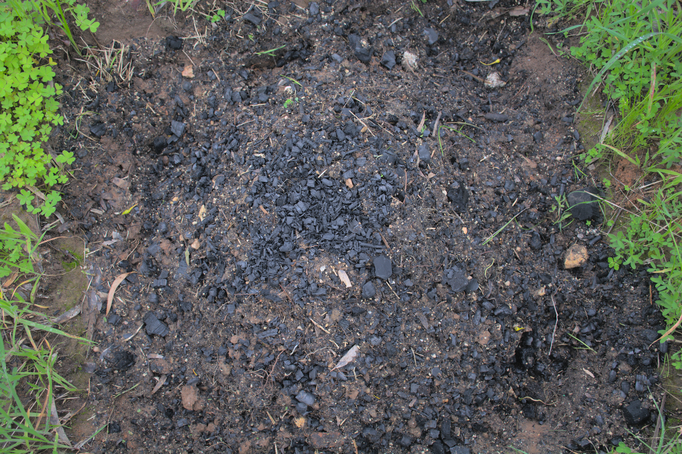 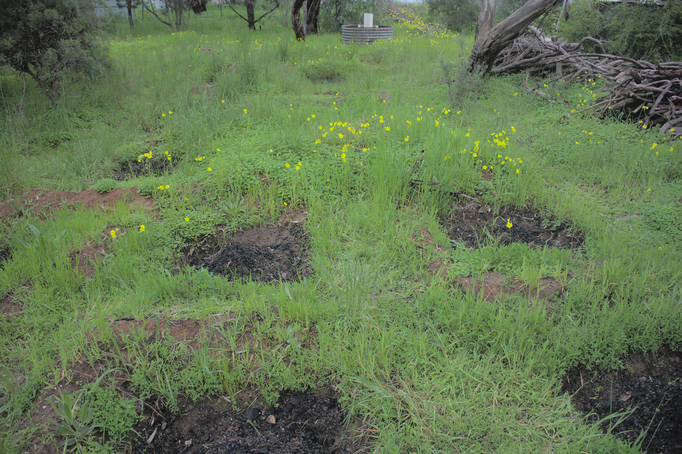 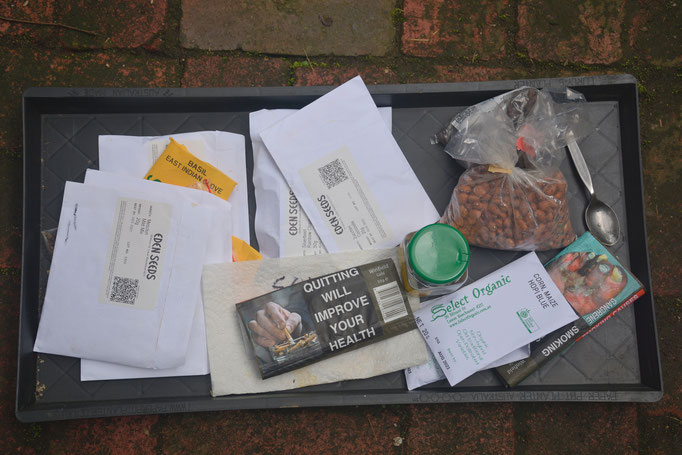 Planted out the '3 Sisters' in 8 of the pits, 4 pits with mystery multi-coloured maize from my friend and borlotti beans and squash and 4 pits with Blue Hopi Maize, Bush bean gourmet delight and squash. I found one pit wasn't draining properly so I didn't plant it out. The other 7 pits. 3 furrows per pit, of Ceylon Spinach, Malabar Red Spinach, Rainbow chard and rocket. I may have to build some thin bamboo trellises for the spinach.

I seeded 3 of my original Permafert swales with zucchini, the other 2 still has Sunchoke tubers.

I also implemented denser plantings this season using direct seeding rather than seedlings, assuming only some of the seeds will germinate and grow.

Any thoughts about how we can improve the systems please send me a message on the contact page. I now have my KTE prototype (see 'Kon-Tiki 'Essential'' page) in hand and will keep you posted with the initial results.